As any real car enthusiast in the United States is well aware of, the Woodward Dream Cruise took place this past Saturday on the fabulous 8 lane wide Woodward Avenue.  The show brought about an amazing outcome of stunning cars and trucks along with all types of car enthusiasts.  I'm not a big fan of August because it feels like the year's biggest "Sunday" ever since the summer is coming to an end and it's about time to get back to the grind in September (which feels like the biggest "Monday" ever).  However, the Dream Cruise gives us petrol-heads something to love in such a month and it did not disappoint this year.  I was out there with a few friends in my 2006 Charger Daytona sporting my new CarWars.us windshield banner to help promote my website.  Talk about impression ads.  You can't lose with a Dream Cruise population that's over one million strong. 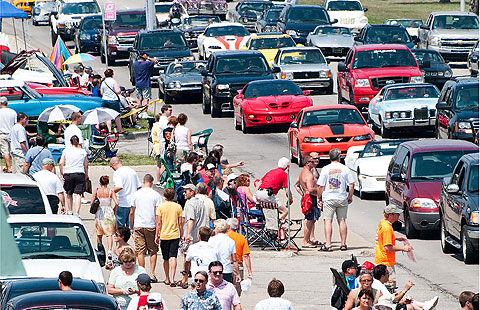 I heard something interesting on the radio the other day that I feel the need to discuss.  A local radio station was talking about the Cruise and how it should be exclusively for classic muscle cars.  While I love the classics and what they stand for, that was one of the dumbest, most arrogant statements I had ever heard.  So, the Woodward Dream cruise should only cater to old men who were fortunate enough to hold on to their first cars for fifty years?  That just seems wrong.  I get it, the Dream Cruise is a fantastic show if you love the classics like the '64 1/2 Mustang, Hemi 'Cuda, and '73 Camaro Z28 but that's not all it's about.  In my opinion, the Dream Cruise is about cars.  All cars.  It's about the evolution from the first generation of a model year to the most recent.  Where else are you going to see every single generation of Mustang in the same five minutes?  Talk about watching the evolution of an icon unfold right before your eyes.

If the Dream Cruise was truly only for the old, classic Muscle cars from the 50s, 60s, and 70s, then I obviously shouldn't have been there in my '06 Charger.  However, where is the cutoff?  My car is five years old and is by no means a classic.  What about the '90-'93 Mustang?  Is that far back enough?  Maybe the Camaro IROC-Z is?  The line is very, very blurry on what should make the "classic" cut.  That's when I would say "screw it, just let everybody come".  If somebody has a car they are proud of, they deserve to be a part of the cruise.  Us car guys don't have the luxury of exclusivity.  Subaru or Ford, we need to stick together!

The Dream Cruise is one of the automotive world's largest events and I think some people have gotten a little too stingy about what belongs and what does not.  Let's just forget about that crap and get back to appreciating great cars for what they are: a phenomenal source of entertainment.  There was a point in my life where I disliked anything that wasn't American.  Subaru WRX, Mitsubishi Evo, Honda S2000?  I would not have it!  That side of me has long vanished and I can now truly call myself a car guy.  I enjoyed looking at Toyota Supras just as much as I loved watching a '69 Charger Daytona roll by with it's 3' spoiler.  If you don't share this outlook, then you have some learning to do.  It's not about the make, it's about the model.  Let's just do away with the discrimination of the Dream Cruise and appreciate everything that shows up for the show.  Now, if they start saying the Cruise should only be for electric cars, that's a different story...
Posted by Jake Lane at 9:30 AM

Jake Lane
I am a student at Albion College going into my senior year as a Spanish and English Double Major. I am a captain of the Albion Swim Team and a three-time national champion white water canoeist. I work for Classic Design Concepts over the summer and build aftermarket components for American muscle cars as well as write articles and press releases about new vehicles. I am obsessed with cars. I spend hours each day reading up on new and old models and researching cars I would like to own someday. I drive a 2006 Charger Daytona R/T that I've been doing work to for the past three years or so. It was my first car and I plan to hold on to it for many years. Through my passion for cars, I developed the website CarWars as a social network for automotive enthusiasts like myself to help people get connected with other petrol heads who share their passion.